Who wears the trousers?

I have spent a lot of time reflecting upon what and why it hasn't worked out with the majority of my exes and having spoken to my mum and read god knows how many books and articles on relationships. I finally feel like I know the answer. People have always said it must be a certain type that I go for, which I have always replied "no" as they have all been very different.

After years of attempting to find the answer and years falling for the same type of men I now feel total comfort knowing I have my answer.

Now this theory, I would say applies to all exes minus 3. It comes down to the way I have been bought up and view men and what type of role they have in a relationship.

I have grown up with older generation parents, having been the youngest of 5 children and there being quite an age gap between me and the next sibling in age.

My parents are what I would describe as quite "traditional" to the western family. My dad worked 2 jobs, whilst my mum stayed at home and looked after the children and had a part time job as I got older. My dad took care of the finances whilst my mum cooked and cleaned. It is what I knew to be the norm of how relationships were. This is neither a right or wrong way to live in a relationship but it is what I have been used to. My dad was the dominant male and although my mum wasn't needy, as was quite independent in certain aspects. It seemed to work well. They have been married since 1959, so they have obviously been doing something right. One way of looking at it is that my dad certainly wore the trousers in the relationship.

They are from a generation that fixed things and didn't have the attitude we consume now of the throw away society. Back then things were made and built to last far longer than things are now. That goes for not only relationships but electrical goods, furniture, clothes amongst other things!

All but a few relationships I have had the majority of the men I have dated/been in long term relationships with have been bought up in a very different environment to myself.

Is this a generational thing? Perhaps. But another contributing factor is that the parents have split up, been single mum's for a while, on their second or even third marriage. So the mother has had no choice to become independent and rule her own roost, so the dads then potentially just let the women get on with it for an easy life? I don't know I am just speculating.

For there is no right or wrong way to be bought up and certainly no rule to who wears the trousers so to speak.

I know now a days that the role of the woman in the family has changed dramatically, is this down to society influence? or personal preference? or both?

For me, I seem to have ended up in relationships with men that have grown up where the mother wears the trousers and is in control I guess. They appear to have learnt that it is easier to take the back seat, albeit not all the time but for the best part of making decisions, organising things etc.

For me, I am quite happy to organise holidays, days out, nights out, phone restaurants etc but because it almost became expected that I would do it I think deep within me I started to feel resentment as I grew up with a man doing most if these things and when the past relationships didn't do this it caused problems.

I am not saying that they never organised things, far from it. I have had a few surprises but generally speaking it landed in my lap. For many women this is great and they cant see a problem with this, maybe because they have been bought up by a different generation or their nuclear family has broken down enabling the woman to become the dominant? Like I said there is no right or wrong way but what I do know is that I do not ever want to be a with a man who has been bought up this way as it isn't what I want.

I have a very close male friend and people ask all the time why we aren't together. Despite the fact I see him as a brother, he is certainly a man that enables the women to wear the trousers for an easy life. If we make plans it is usually down to me. He will say things like "You book it and I will give you the money". "You decide". I have spoken to him about this and he thinks i could be on to something. His mother was the dominant as his father sadly ended his life when he was a child. He disclosed that his past relationships were usually driven by the female.  He stated that although he loved them at the time, they were quite bossy (in the nicest way) which might go with the fact that they were more in control and wore the trousers!

I see these differences in relationships all the time, I observe who wears the trousers and see how being bought up a certain way can impact upon future building blocks and "unwritten rules" in relationships.

In a relationship I require a man to be wearing the trousers most of the time, not for me to do it for them. If it takes someone to be of autocractic character to wear the trousers then that isn't for me.

Obviously there is give and take but I know for a fact that I don't want to wear the trousers, it is not for me. Been there and been forced to take that role and it causes a massive rift. If I had realised this years ago I think it might have saved an awful lot of heartache.

Some men like to be dominant some men prefer the woman to take control and vise versa for women. There is no right or wrong.

Can both wear the trousers?...Not really, in most relationships whether friendships or romantic relationships, humans or even animals there is usually one more dominant one of the family/group/partnership.

Establishing which role you are early on in a relationship could certainly make life more relaxed.

Maybe I am old fashioned like my parents......or .... maybe I am just looking for my very own Mr Grey! 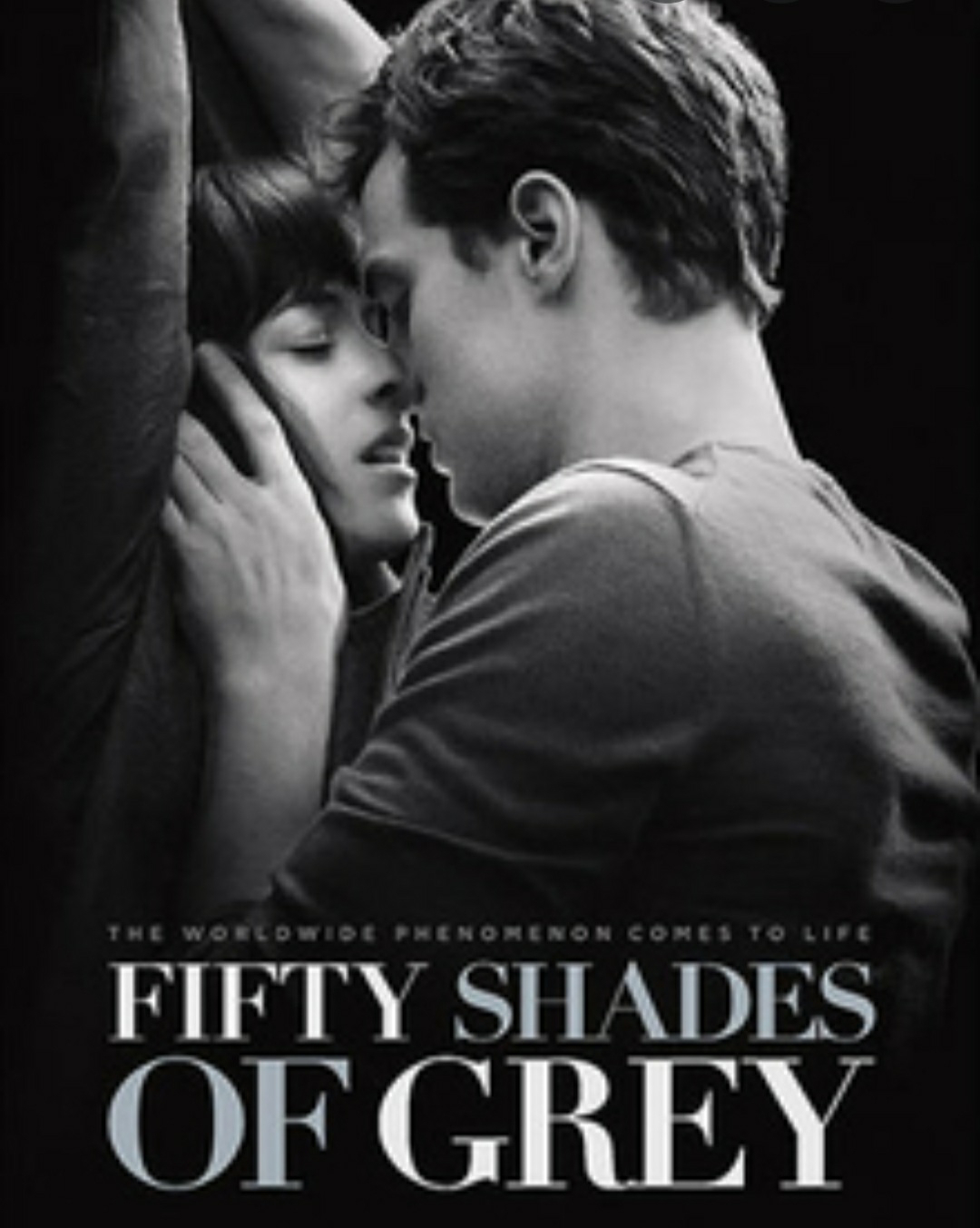 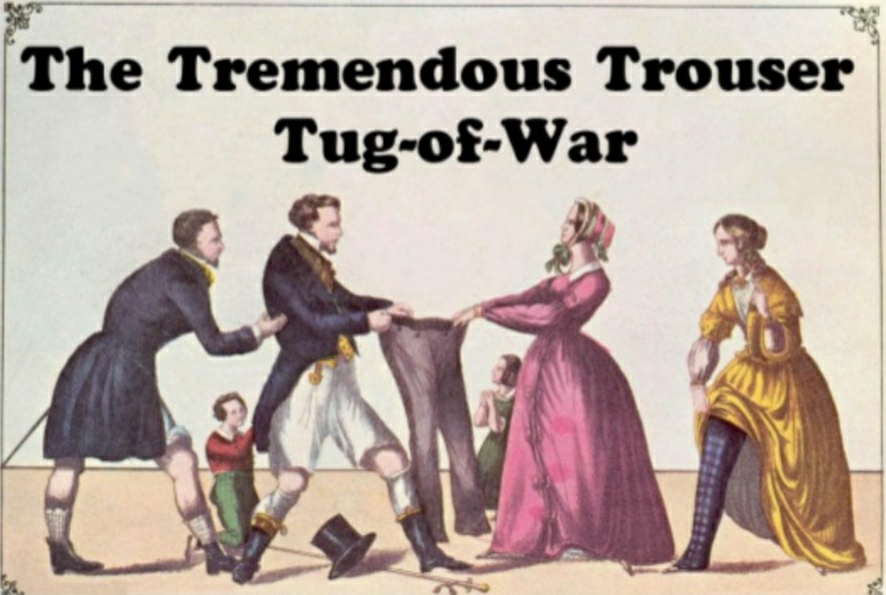 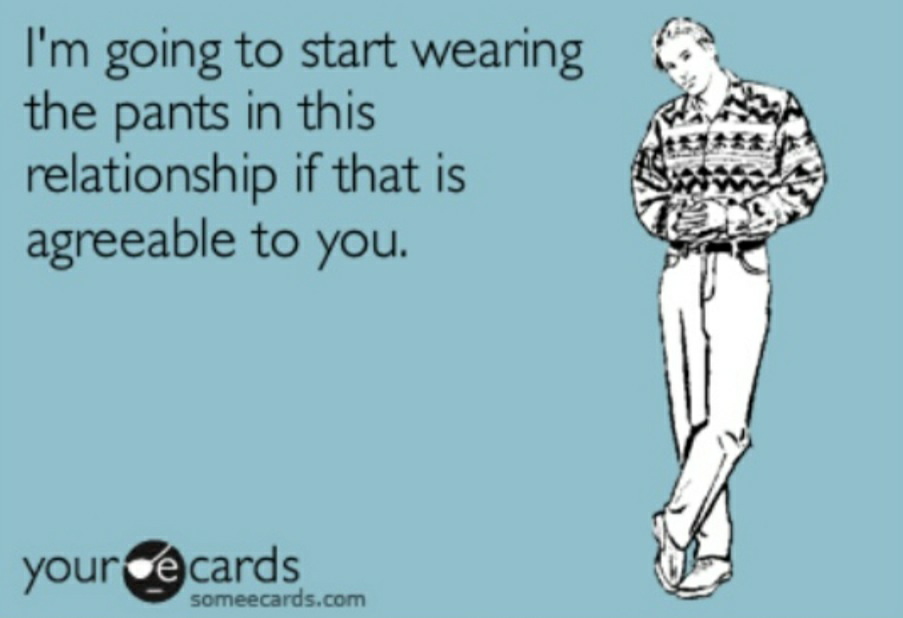