The good, the bad and the "you don't look like your profile"

Internet dating is by far the strangest concept nowadays, as you can read in my post "Dating in the 21st Century" and I am really not a huge fan of it, however, sadly in this day and age it seems like the only way to meet someone.

Dating is an absolute mind field and you never really know what the hell to expect. I know that I would rather meet early on instead of sending and receiving messages of aimless chit chat for weeks, you know how I feel about that... see chit chat post! I would rather just get on with meeting up to fathom if indeed there is a spark in real life.

I have had some absolute fantastic first dates with some genuinely nice guys, but soon realised that they are more friend material than partner materiel.

I have had some fabulous weekends away, days out, lovely meals, laughs, dancing, walks and drinks.

Some of the nicest first dates were a picnic in a field, a trip to wales and of course a good old fashioned pub for a few drinks. I have been to the Sealife Centre, dog walking, Crazy Golf, Safari Park and even to Tenerife and Lanzarote on first dates!

But some of the most memorable ones are the ones that didn't quite turn out to plan...

I have had men turn up that are very angry and actually disclose they require anger management, women haters, loud/shouty men, too shy to talk men, men that do not eat after 2pm in the afternoon - not so great when you are starving on a date and it is 4pm!

I have had a man drip with excessive sweat from anxiety, stolen sweets, showed up with food debris in their teeth. Smelly men, rude men, men who hate animals - yes that ones says a lot. Drunk men, men that don't drink, men who have never seen a toothbrush, men that turn up in flash cars and men that show up on skateboards. Men who look like they have been homeless for a month and never seen a washing machine, off their head men (on amphetamines) and the worst of all men that do not look anything like their pictures in every way....lied about their height/weight, the pictures were filtered, the pictures are 15 years old, lied about their age.

One man turned up to my house so drunk he could barely stand up, I ushered him off to the local pub and left. Another man sat swiping on Tinder whilst I was sat with him! One dates teeth were so splattered with what looked like the remains of bread and mayo combo, it was so vile to look at I decided to get drunk so I no longer could focus on his dirty teeth.

Teeth are a huge factor for me and I know that not everyone in life is lucky enough to have a straight, white set of pearls but it can be a game changer for me. I no longer swipe on people who never smile without teeth on show in at least one picture, because from experience if you cant see their pearly whites in any pictures the chances are that they either have no, brown or just terrible teeth. I no I shouldn't judge on oral hygiene and we all have standards, but that is one standard I refuse to lower! One guy turned up and he had teeth like he had been addicted to crystal meth for at least 4 years....he never smiled showing teeth in any pictures.

It was just before lockdown and toilet rolls were like gold dust and so the date who was travelling to see me quite a distance to my house asked if he could get me anything from the services on the way.... due to the crazy pandemic I asked for a packet of toilet roll as I had been unable to get any from my local shop, so I was expecting a 4 pack and instead I received what only looked like a dirty, minging stained half used roll stolen from the service station toilet, now I am not a toilet roll snob by all means and I know that beggars cant be choosers in a pandemic but I am sure that that toilet roll actually gave me covid - 19 ...needless to say it went in the bin as looked contaminated (shudders).

I have indeed walked out on dates, ran away from dates, hidden from dates and made THAT emergency phone call. I have done the unforgivable thing of ghosting and blocking certain men....although I learnt that actually it is better and far nicer to send a quick message to say thanks but no thanks.

Is it easier to be sober or merry or drunk? to have dinner? to starve? to do an activity? On a personal level I prefer to have a couple of drinks, but not to have any more, as the seemingly unhandsome, boring man sat before me can start to become desirable...which inevitably ends in disaster and an uncomfortable snog at the end. It can be fun to engage in activity and I must admit I prefer to eat on a first date as if nothing else to talk about you can discuss the menu!

I feel that I should be an expert at the dating scene, but each first date is an entirely new experience from the last. I rarely worry about what I am going to wear anymore and have certain clothes in my wardrobe set aside for first dates depending on where the date takes place. More often than not comfortable, as I have learnt that the "sexy" flashing too much skin only gives one impression! I like to leave some things to their imagination!

I really have no idea as to why people think that it is ok to not look like their profile pictures, why would you want to give a false impression of yourself?

My online profile pictures are up to date and a combination of full length, head and shoulders and are unfiltered. I can not see the point in filtering for the person I am meeting to be disappointed that I am not flawless!

In fact I am the worlds worst at selfies and have no idea what angle, lighting etc I should be taking these pictures. I have had the same comment from many men that I actually look better in real life than my pictures! Now, this is nice as obviously great to feel that way on a date, but not so great trying to get a date based on my not so great pictures in the first place!

So what do these men hope to achieve from not looking like their pictures? Are they hoping that I am partially sighted or that I will ignore that they are a foot shorter/taller and have different hair and 20lbs different in weight to the person I swiped on in the picture? Are they hoping that I will fall in love with their lying personalities?! I personally prefer the "verified" profiles now a days, at least that way you know that you aren't going to be meeting someone totally different! But do all people verify....I think not. It is a battlefield.

So before you set up a profile, please people make sure the pictures are at least true to life as you can get them.... 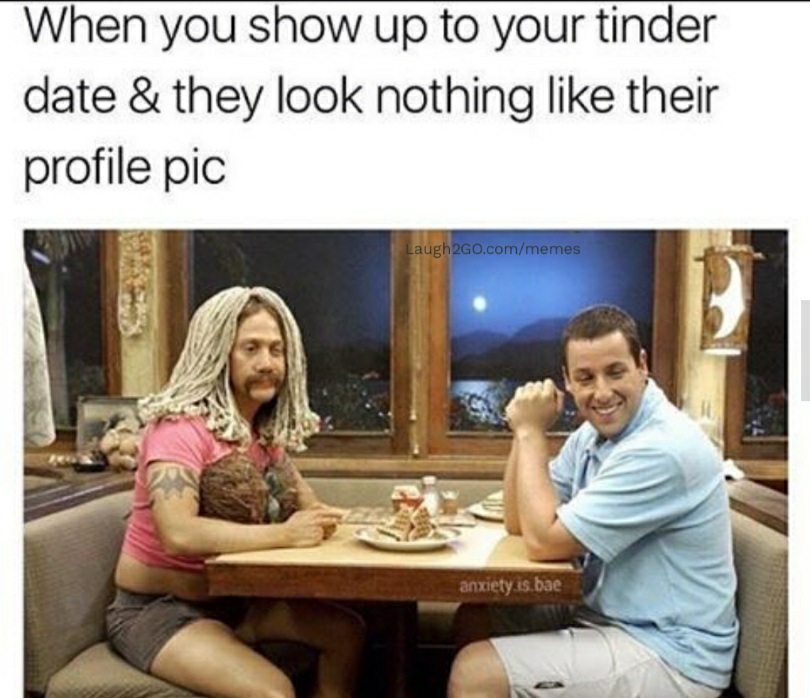