Cheats and Overlappers - Is there ever any justification?

Having suffered to the hands of many cheaters and overlappers I can honestly say it is probably the one thing that I really do not condone.

It is one of the many things that I can not get my head around. For me if you are in an unhappy relationship it is better to end it than to start a relationship with someone else, whether it be a long term affair or secret rendez vous with various people. Maybe I am narrow minded and should be more accepting of this behaviour, after all I don't know the circumstances of why the cheater hasn't left and I am sure there are thousands of excuses that they come up with.

So what is cheating? For me I believe cheating is anything that encompasses deceit in the form of having to hide any form of communication with a potential romantic interest that you feel that you need to hide from a current partner.

This could be meeting up and being intimate with someone else or sending text messages that if your partner found would feel hurt and upset. If you have to hide this type of behaviour from your partner, unless you are organising a surprise birthday party then you are more than likely guilty of cheating. If you have to hide and delete you are likely to be behaving badly and have zero respect for any one other than yourself. 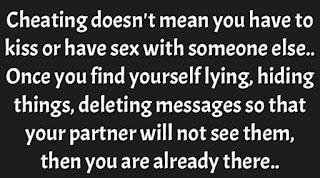 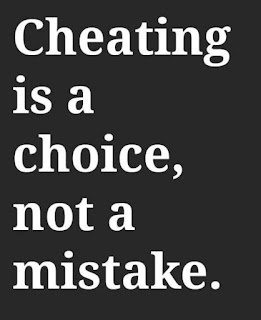 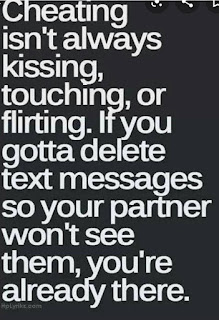 Even if you have the worst partner in the world and dislike them, what do you gain by cheating on them? Is it not better to just get out and move forward with someone else? I appreciate it can be complicated with children, debt, financial responsibilities but surely it is better to do the honorable, respectful thing to end the relationship than to be a cheat and destroy a family or the trust of others in one foul swoop?

So what is an overlapper? Well this is a new term for me but totally rings sense if you have read my post "The Practice Wife" or "Time Alone or Rebound?.. The Red Flag of Grief". Overlapping is when someone starts chatting to someone, not necessarily being intimate with, but communicates in such a way that it potentially could as soon as the relationship ends with current partner. My understanding of this is that the overlapper is wishing to end the relationship but actually doesn't want to be alone so actively looks for a replacement to engage into a relationship with as soon as they ends theirs. Very similar to cheating but not quite at the destruction level, but none the less very sneaky behaviour. 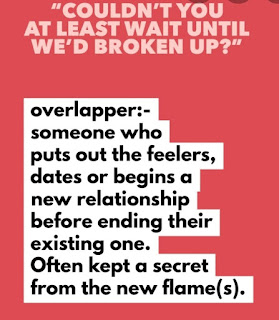 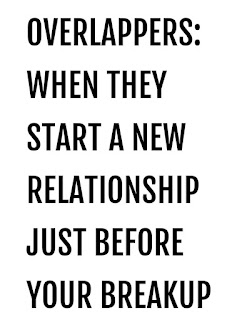 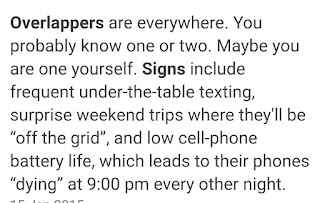 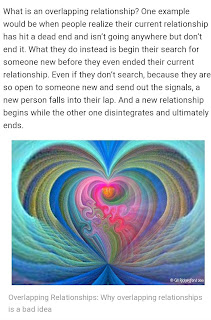 I have experienced both of this type of behaviour and what I will say is that it is pretty shit to be in that situation. I know being in a rubbish relationship is bad enough but when the person you trust most does the dirty it hurts like hell.

It makes you question everything about yourself and doubt your own sanity. One particular relationship where I was being cheated on, he use to lie about everything. It became that bad that it felt quite like the gaslighting effect, where if I dared question his behaviour or where about's he would make it out like I was going crazy. 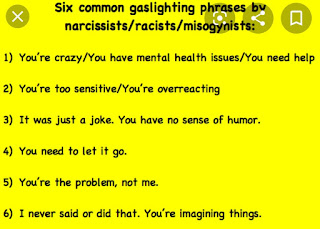 Hindsight is a beautiful thing and now I can see that he was a prolific offender of cheating and overlapping behaviours. At the time he made me feel horrendous. In fact he lied so much about his "activity" it became very apparent that he had got him self a sexually transmitted disease whilst we were together! I know unreal really yet he gaslighted me so much that made me think that one of us had had it 4 years prior before we met, although at that time, when we first got together we both tested negative. I should have left at that moment but continued the relationship which he continued to lie and more than likely cheat until he at the end was having an affair. I eventually found out, but I believed his lies and extraordinary stories for so long. A coward of a man, if you can call him a man. But that relationship and how it ended is for another post. I might call it "Thank god we never made it"!

Would it be safe to say that Cheaters and Overlappers are selfish? That they are not actually regarding the feelings of anyone else? Are they thinking about the person sat at home, their children or even the person they are cheating with, if of course that person doesn't know. If they do, then they are just as guilty. I wonder what justification they have?

Surely leading a double life would be extremely exhausting trying to maintain a lie. I am unsure why they do it? Is the grass always greener? And if it is why not gate the field the current grass is in give it a good mow and move. Then and only then should they be choosing a new plot of land with fresh grass.

Breakups are difficult at the best of times but surely it saves for even more hurt in the long run if they have affairs? I would rather my exes have left me before they had affairs that's for sure.

From my experience I believe anyone is capable of having an affair and I understand accidents can happen but how is jumping into bed with someone else an accident? Surely that is a choice? It comes down to morals and respect.

Do people who cheat or overlap continue to maintain this behaviour? The age old saying "Once a cheat, always a cheat". Well from my experience and only mine I can say I do believe it is true. If a child can get away with taking the extra cookie in the hope of not being caught, many will.

The men that have cheated on me have either cheated on previous girlfriends before or gone on to cheat after cheating on me. Perhaps it comes down to whether you've been cheated on yourself, depends on whether you carry the same behaviour out or not. But then there are people out there who have been cheated on and continue to cheat themselves. So perhaps it comes down to genetic make up? Is it nature or nurture? I would suggest nurture but then I haven't enough evidence to suggest that this is true.

I generally don't think people change their behaviours and if they have the capability to cheat or overlap are likely to repeat that behaviour. It might not be every time but I think that potentially if unhappy they will seek it else where before getting out of the current relationship. I could call them cowards, would this be a fair word to use? Nobody likes to be the bad guy and end a relationship, but it takes a far more decent human being to end it than to cheat or overlap.

Perhaps these cheaters and overlappers are so unhappy with being single that they just move from one relationship to another with out any down time.

For me being single is really important for growth, especially between breakups. Maybe people are incapable of having single time. Perhaps they aren't happy with themselves deep down and have no idea of how to be in their own company for long periods and that they constantly need and want reassurance and attention from someone else?

Is there ever any justification? I generally think the answer to that is "No" People who cheat and overlap need to either stay in the relationship without seeking that missing something from someone else or end it.

Generally people always get caught and people always find out and that's when innocent people get hurt and the destruction starts.

So before you cheat or overlap, think about how you would feel if you found out someone was doing it to you.